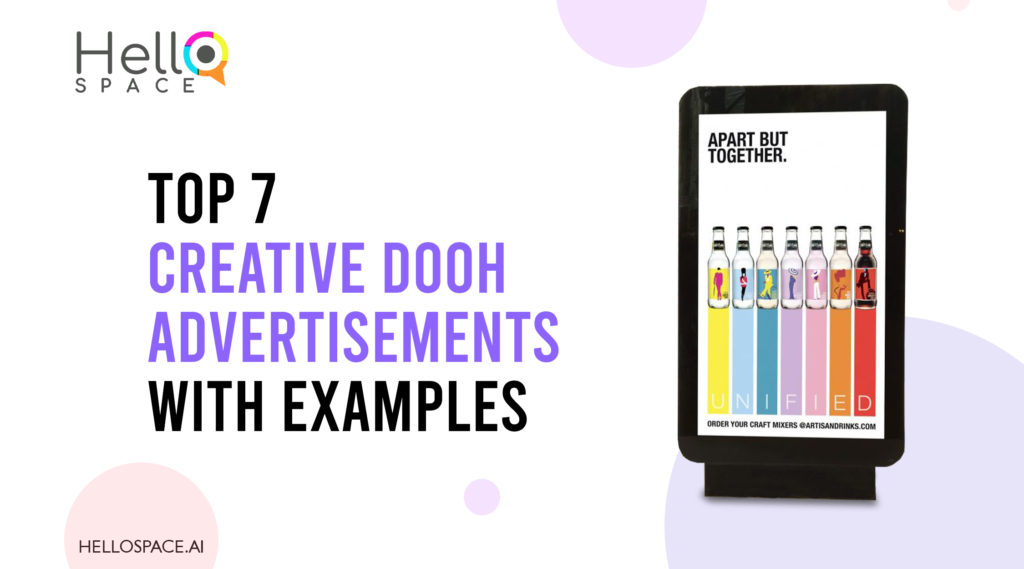 (Creative DOOH Advertisements With Examples) Billboards are oversized display ads on buildings that are facing the roads used for Out of Home Advertising. This kind of advertisements dates back to the 1830s. With the evolution of technology, this advertisement medium has evolved as well. This new era of advertising is termed Digital Out-of-home Advertising. These displays are responsive to movement, weather conditions, time of the day etc. They can also be configured using AI.

The world of advertising has been revolutionized by digital technology. The first digital DOOH displays were installed in 2001. The display wasn’t completely digital and had a low-resolution compared to today’s screen. But, back in the day, this was groundbreaking. Since then, a lot has changed. Smart displays have evolved to a place where they combine digital display design and big data analytics. Some advertisers use information from smartphone tracking to adjust the ads. The world’s first interactive billboard was launched by Porsche in January 2015. Advertisers have found that digital displays have a high recall rate and offer a much higher ROI as compared to traditional hoardings & DOOH displays.

Outdoor advertising has moved beyond static display and extended to interactive experiences that offer better customer audiences. Many digital out of home advertising companies are expanding to digital advertising to execute more creative campaigns. The top 7 creative DOOH advertising ideas amongst them are:-

With the ZPump 2.0 campaign Reebok launched, they brought out an interesting concept to up their publicity game. They installed an outdoor display with a speed camera. It used motion detection and real-time object recognition to identify people running past it and calculate their speed. People who ran past the screen at a speed higher than 17km/hr unlocked a free new pair of shoes.

As part of its Wonder-filled campaign, Oreo took over the largest advertising space in Times Square and published not one but 12 DOOH Screens. The digital screens displayed Oreos being shared across mediums and created a visual tapestry that extended across buildings.

Apotek created a responsive display designed to fight against smoking. The advertisement was activated every time a smoker walked past. The smoke detectors in the DOOH screen were activated and triggered the video of a man coughing followed by an anti-smoking message and an advertisement for products that can help with nicotine addiction.

This digital outdoor advertising used facial recognition cameras that could identify people by gender, age and expression. This data allowed the DOOH Screen to respond dynamically. For example, when a woman walked by, a video with the phrase, “Hello my lady” would play on the screen. The screen could also be used to play interactive games with the onlooker.

British Airways creative ad used data from surveillance technology for tracking flights to grab attention. When a British Airways flight flew overhead, the image of a child walked across the screen pointing towards the flight. The flight number and destination were also displayed on the screen. The display used technology to channel an audience’s excitement and make the advertisement look magical!

The Coca Cola ad is based on the viewer’s emotions instead of his/ her browsing history. This billboard was an attempt by the brand to connect with its audience. The billboard uses facial recognition. When a person comes towards the billboard the face on it smiles and winks.

What is Digital Out of Home Advertising?

What is the DOOH market size in India?

DOOH has reached heights in the advertisement industry in very less time since its introduction in India. Since it is a growing market in India, DOOH’s market size is expected to grow exponentially in the near future.

Which are the top ooh companies in India?

Division of Labor, THIEL, ThreeSixtyEight are a few of the top OOH companies.

Hello space is a revolutionary, one of a kind, digital out of home advertisement platform.

Our aim is to be the partner of choice for advertisers, brands and agencies who target customers on the go.